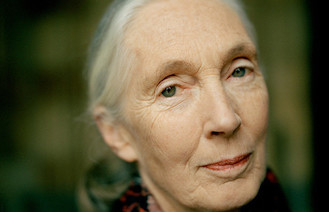 I am excited that the inaugural episode of The Social Strategist: A Conversation on Cause Based Communication features a special interview with Dr. Jane Goodall, the world’s foremost authority on chimpanzees and a United Nations Messenger of Peace.

Dr. Goodall is the founder of the Jane Goodall Institute (JGI) and is also my boss since I serve as JGI’s manager of outreach and public relations, in addition to pursuing my master’s degree at Georgetown.

Everyone knows Jane Goodall because of her work in Africa and the many National Geographic articles and TV specials over the years. But since the 1980s, her mission has expanded into a personal quest to help all living things through sustainable solutions and her belief that every individual person has the power to make a difference in the world.

To accomplish her mission Dr. Goodall formed JGI, a global grassroots nonprofit with offices in more than 27 countries around the world. She also created an international youth service program called Jane Goodall’s Roots & Shoots, which has active groups in more than 130 countries and empowers young people to create projects that help people, animals and the environment we all share.

This past year, Dr. Goodall celebrated the 50th anniversary of when she first set foot in Gombe National Park, in what is now Tanzania, to begin her incredible chimpanzee research which continues to this day.

I sat down with her in Yakima, Washington where we were traveling last month for a speaking engagement. We spoke very candidly about her methods of effective communication, about her crazy life traveling more than 300-days-per-year around the world raising awareness about the threats facing the environment and so much more. The interview is broken into two parts.

What are some of Dr. Goodall’s communication secrets, you ask? Here’s a preview:

1. Images helped to put Dr. Goodall on the map and tell her story to the world.

“Photos made a HUGE difference,” Dr. Goodall says about the first images that appeared in National Geographic and told the story of her work in Africa to the world. In the interview, she explains how the National Geographic Society first sent her a camera to shoot on her own and that the images of the Gombe chimps have become so iconic over the decades. Those photos have transported the minds and hearts of supporters into forests halfway around the world as well as making individual chimps stars in their own right along the way, she adds.

2. In-person touring and establishing a human connection are key ways to spark a conversation and ensure sustainable change.

In the interview, Dr. Goodall recalls the first time she was asked to give a public talk and being exceptionally nervous. She speaks to the evolution she had from scientist to advocate and starting her perpetual world tour. Why does she travel so much raising awareness? “So many people have said to me, Jane when you’re there and we’re listening to you it’s different. We knew about this [subject], but when you were standing up there on the platform and telling us in person it made a much greater impact,” she says.

3. Storytelling is imperative in a cause-based messaging strategy.

Dr. Goodall credits her storytelling ability, thanks to her Welsh ancestry, with making her a powerful communicator.  “It’s personal stories that make the most difference, that are the most powerful. Things one’s actually seen. Things that you know to be true. Things that are funny. Things that are sad. A mixture of the two,” she explains.

“I don’t think that at this stage that [just] reaching people’s heads is sufficient and very often it doesn’t work,” Dr. Goodall says.

"It's personal stories that make the most difference, that are the most powerful. Things one's actually seen. Things that you know to be true."