Breaking through the noise: Digital storytelling for social impact

Every organization has a story to tell. With the rise of new and ever-changing technologies, people are more connected to information than ever before. Nonprofit organizations are facing an unprecedented opportunity to harness the power of narratives to tell compelling stories and showcase their impact. However, the ubiquity of the digital world makes it a lot harder for nonprofit organizations, who are more likely to have limited access to resources to gather and curate compelling stories, to stand out among the crowd.

As social media users, we are exposed to and interact with an incredible amount of content every day. It has been calculated that in 60 seconds, Facebook and Instagram posts receive more than 4 million and 2.5 million likes respectively. Research also shows that younger generations scroll through their feeds much more quickly when on mobile devices, which means it can be a lot harder to capture and retain their attention.

A study by the Rockefeller Foundation, Digital Storytelling for Social Impact, evaluating the current state of digital storytelling amongst multiple industries, reveals the common need for practical support to produce and share stories that advance an organization’s overall goals.

So, the question is: How can nonprofit organizations break through the noise and tell their stories effectively via digital channels?

Compelling Character:
Stories should contain a single, compelling character that is relatable to the audience. A “Story,” which is defined as “a description of an event or something that happened to someone” (Collins Dictionary), should focus on an individual and position the organization as the “enabler” rather than the protagonist. A study by Georgetown University’s Center for Social Impact Communication, Stories Worth Telling, identifies four aspects that make a character ‘effective:

Catchy Opening:
Humans have shorter attention spans than goldfish, eight vs. nine seconds, to be exact. Research conducted on Facebook shows that the average length of a video published on the platform in 2017 was 3 minutes and 48 seconds, but the average time watched was only 10 seconds, or 4% of the full video. What does this mean for digital storytellers? That they have only few seconds to capture their audience’s attention, especially through videos, so what they really need is a catchy opening – like a ‘hook’.

A hook could be displayed in many different ways, such as showing what’s at stake and how that is relatable to the viewers, introducing a problem or asking a question and offering a solution at the end of the video. This video by One Young World is a good example of a video story with a catchy opening and compelling character.

Clear Call-to-Action:
Storytelling can only contribute to advance an organization’s goal if it inspires and motivate people to take an action toward the same goal. Therefore, storytellers have to be strategic in order to maximize the desired impact. With videos, having a clear call-to-action may involve adding a line at the end spelling out what you want your audience to do.

Among the organizations analyzed in the Stories Worth Telling study, the most common call-to-action was donate (77%), followed by volunteer (50%), with sharing the story in a distant third place (5%).

When it comes to digital storytelling and social impact, carefully-crafted calls to action are extremely important and can be creative too. 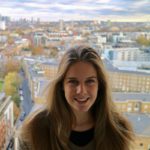 Sara Dal Lago is a multilingual communications professional passionate about all things creative, digital and social impact. She serves as Digital Communications Manager at the London-based nonprofit, One Young World. Sara is a Cause Consultant, served as CSIC student editorial board member and was awarded the 2016 Tropaia Award for Social Impact. She graduated from Georgetown University’s MPS in Public Relations & Corporate Communications in 2016.